HelloMD, one of the nation’s largest community of medical cannabis patients, partnered with researchers from the University of California, Berkeley, to examine how cannabis has affected Americans consumption of opioids. The results of the landmark study show that patients, given a choice, would overwhelmingly choose cannabis over opioid medication, saying the herb works just as well and with fewer side effects.

Key findings of the show:

The researchers collected survey data from close to 3,000 participants, questioning their usage of cannabis and how it has affected their consumption of opioids.

The news comes at a critical time as drug overdose deaths and opioid-involved deaths in the U.S. continue to skyrocket. According to the CDC, most drug overdose deaths (more than 60 percent) involve an opioid with 91 Americans dying every day from an opioid overdose, including prescription opioids and heroin.

“The latest publication from the National Academy of Sciences clearly refuted the ‘gateway drug’ theory that using marijuana can lead to opioid addiction, instead finding evidence of cannabis having multiple curative benefits,” said Dr. Perry Solomon, chief medical officer of HelloMD. “Our study further substantiates this. Hopefully this will awaken the public, medical professionals and legislatures to the fact that cannabis is a safe, non-addictive product, available to help fight the opioid epidemic.” 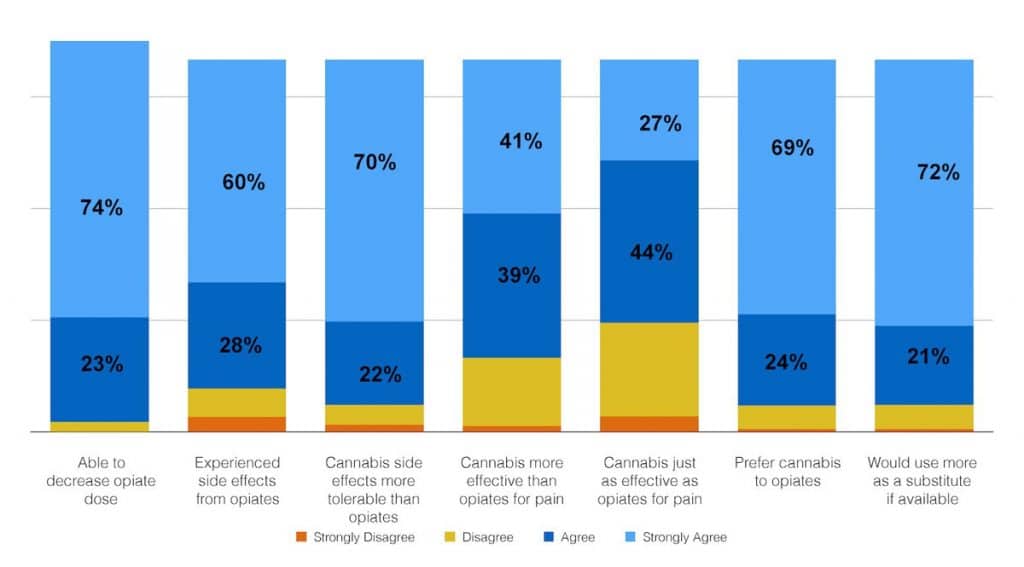 Amanda Reiman, one of the lead researchers of the study and a lecturer in the School of Social Welfare at UC Berkeley, said:

“The treatment of pain has become a politicized business in the United States. The result has been the rapidly rising rate of opioid related overdoses and dependence. Cannabis has been used throughout the world for thousands of years to treat pain and other physical and mental health conditions. Patients have been telling us for decades that this practice is producing better outcomes than the use of opioid based medications. It’s past time for the medical profession to get over their reefer madness and start working with the medical cannabis movement and industry to slow down the destruction being caused by the over prescribing and overuse of opioids.”

The study revealed that cannabis, in combination with opioid pain medications, can lower opioid side effects, cravings, and withdrawal severity, as well as enhance the analgesic effects of opioids, thereby allowing for lower doses and less risk of overdose.